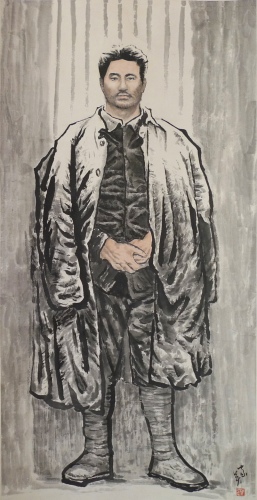 Signature and Seal : Sogo
Scroll size : 57.2cm by 194.5cm / 22.5″ by 76.5″
Material of the roller ends : Wood
Technique : Ink painting on paper
18th century, Japan
Jittoku / Shide (9th century) was a minor Tang Dynasty Chinese Buddhist poet in Guoqing Temple, in the Tiantai Mountain range on the East China Sea coast; roughly contemporary with Hanshan and Fenggan, but younger than either. He was close friends with both and together they formed the “Tiantai Trio”. Shide lived as a lay monk, and worked most of his life in the kitchen of Guoqing Temple.

Mori Sosen (?1747-1821)
Scroll size: 163x40cm
The signature reads ‘Sosen’ and the seals read ‘Mori Shushō, and ‘Sosen’
Mori Sosen is most famous for his paintings of monkeys. In about 1808, at the age of sixty-one, he even changed the first character of his name to one meaning ‘monkey’. He also founded a school of animal painting with his brother Shūhō, in Osaka, which parallelled the Maruyama school in Kyoto. His paintings are found in important museums and collections all over the world (among others The British Museum)