Tatsumi Shimura is known for designing several striking bijin-ga prints towards the end of the Shin Hanga movement. Born in Takasaki, Gunma Prefecture, Shimura’s real name was Sentaro Shimura. He lived in Yokohama from 1910 and in 1921 he began studying art with Yamakawa Saiho, a well-known designer. In 1924 he became an apprentice of Yamakawa Shuho (Saiho’s son), who was also a bijin-ga artist. Shimura exhibited paintings with Kyodotai in 1927 and with Seikinkai in 1938. He became known for his paintings of beautiful women with long eyelashes and blurred pupils. As a young man, Tatsumi also worked as an illustrator for newspapers, serialized novels, and magazines, notably for the Japanese magazine “Woman’s world” (Fujokai). His most famous illustrations were for the novel Tange Sazen by Hayashi Fubo. From 1948 to 1952, Shimura designed several woodblock prints of beauties that were published by Kato Junji. Later he collaborated with the Japanese Institute of Prints to create a series called “Five Figures of Modern Beauties” (Gendai bijin fuzoku gotai). These prints were published in 1953 in editions of 200. They depict Japanese women in traditionally feminine poses and attire. The finely detailed figures are juxtaposed against very simple backgrounds. “Late Summer” cleverly alludes to Hokusai’s famous ukiyo-e print Red Fuji pictured on the woman’s fan. After a solo exhibition on his sixtieth birthday in 1967, Shimura devoted his career entirely to Nihonga, or Japanese style painting. 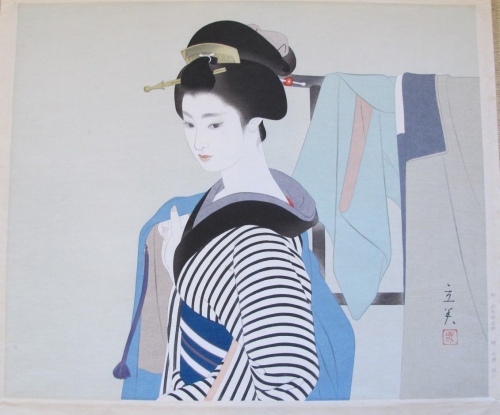 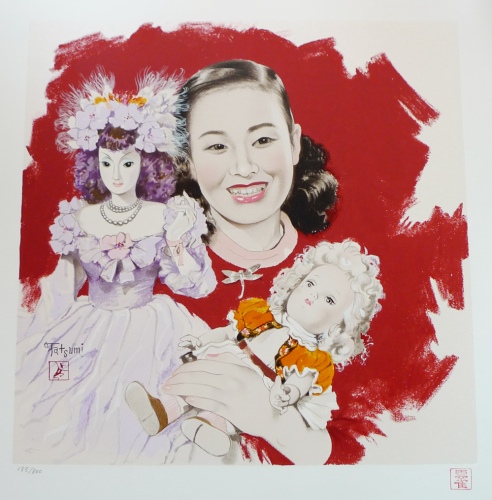